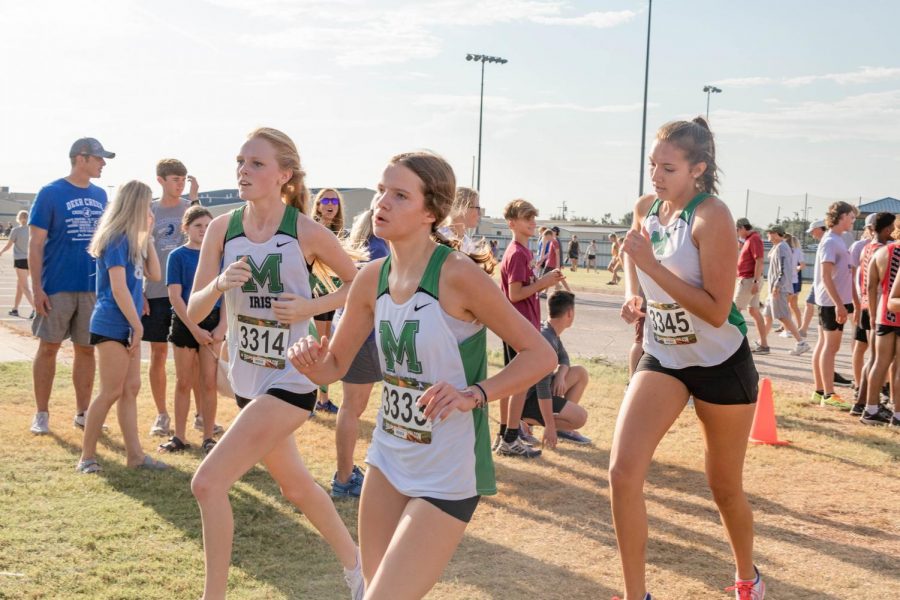 Circled around their coaches, the cross country team captains lead a prayer in hopes of improvement and then take off. As of Aug. 21, both the girls and boys teams are full throttle into their next season, excited for a new year and new goals.

“As a team we would love to place in the top five or seven at state,” senior and boys team captain Nathan Coomes said. “If we step up and put in hard work, effort and have the right attitude, I think we can succeed in that goal.”

Coomes has been a part of the boys cross country team for the past three years and loves the competitive aspect of the sport. He said he has many essentials for success at a race, including water, energy boosting food like fruit or nuts, and, most importantly, his uniform.

“My individual goal this year is to break 18 minutes in the 5k,” Coomes said.

The girls and boys teams both have similar goals, sophomore and girls cross country team captain Sydney Bohanan says they would also like to make it to state.

“Last year we didn’t do too well, so we are going to do better this season,” she said.

Bohanan enjoys being the girls team captain. Despite only being a sophomore, she says it gave her a chance to get closer with the upperclassmen and develop friendships she might not have otherwise.

“I think we are running individually, and if we bonded even more and pushed each other in our races, then we could get even further this year,” Bohanan said.

Senior Kate Skarky said she joined the team this year because she always enjoyed running and wanted to try it since it would be her last year to give it a shot.

“I love being a part of a team all working toward the same thing,” she said.

Putting their right foot in and always stepping forward, members of both teams are running for a better season.